Legend says that in 440 AD a celtic bishop called Patrick was travelling from Iona to Ireland when he was shipwrecked off the coast of Anglesey. Having made his way ashore from the small islet now known as Ynys Badrig (St. Patrick’s Island), the bishop took refuge in a small cave with a nearby well. Patrick commemorated his escape from danger by founding the original Eglwys Llanbadrig – Saint Patrick’s Church.

St Patrick’s Cave is still there, marked by a plaque up on the cliffs overlooking the spot, but the way to the cave itself is steep and dangerous.

The original simple timber church was replaced with a stone version in the 12th century, and then rebuilt in the 14th century in the general form seen today.

What makes Llanbadrig extraordinary – apart from the legend and its status as the oldest church in Wales – is the dramatic refurbishment in 1884. The 3rd Lord Stanley of Alderly had met and married a Spanish Moorish woman, and converted to Islam himself. He donated a substantial sum of money to refurbish the interior of the church to reflect his new faith, so today’s visitors are confronted with a dramatic contrast between the simple stone exterior and the dramatic Moorish interior, which boasts blue tiles, blue glazed windows, and Arabic-style iconography.

We are sorry but dogs are not permitted inside the church. However, there is a secure place to tie up your dog outside, with a water bowl. 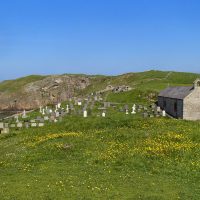